Greece and Spain were in the news once again as economic troubles and efforts to fix them resulted in widespread demonstrations in both countries. In response, equity markets and other risk assets retreated from their recent highs, and investors became willing once again to pay a premium for the perceived safety of low-yielding government bonds.

It was a repeat of a story we have seen many times and are likely to see again. A similar story has run its course in the United States as budget troubles and debt defaults make repeat appearances.

In episodes like these, stock markets tend to overreact, rising exuberantly when the news is good and falling sharply when it disappoints. Chasing such trends tends to result in buying high and selling low, the exact opposite of a sound investment strategy.

Investors can use trying times like these as an opportunity to reflect on their personal actions. What did you do in response to turbulent market conditions? Was it beneficial or detrimental to your long-term goals? A little self reflection can go a long way toward helping you make decisions that are well aligned with your investment objectives.

Everybody sets goals. If doing hard things was just a matter of setting the right goals – then everybody would be accomplishing things left and right, but that’s not the case. It’s not the goal setting that’s tough – it’s the goal doing.

Here are four tips to help you get better at goal doing.

Make Your Goal a Priority

It’s easy to say you don’t enough time, money or energy to do something you want to do, but it’s really not true. You have more than enough resources to do whatever you want to do. It’s not about having more resources, it’s about allocating them correctly.

The biggest reason most people don’t’ achieve their goals is because they simply don’t make them a priority.

If you make something a priority, it means you schedule your other wants, needs and plans around it. You don’t just hope it fits in. You make sacrifices in order to make sure you have resources available to accomplish your priorities. That’s what makes them priorities. 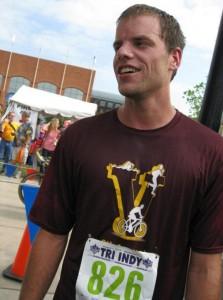 Don’t leave it to chance and don’t just hope that it will happen. If you’re not intentional about creating routines – it simply won’t happen.

Have An Final Incentive

Your goal is an incentive of some sort, but at some points it might not be alluring enough to get you through the times when you just don’t seem to see the immediate payoff. Having a final additional incentive once you reach your goal can help bypass this.

When I got a six pack, I decided to reward myself with a photo shoot. When things got tough and I wanted to give up, I knew I had to keep going because I had a photo shoot already scheduled. If you’re trying to reach a savings goal, create an incentive in addition to your goal. For example, if you hit your savings goal by the end of the year, you’ll go on mini-vacation or at least take a long weekend to do something you really enjoy doing.

If you really go after a goal, you should be a little fanatical about it. If it’s any significant goal at all, your friends and family will probably notice the changes in your behavior. This is a good thing. If they don’t notice a difference in your behavior or habits and even start to think you’ve gone a little nuts, then you’re doing something wrong.

Joel Runyon is the creator of Impossible HQ and the Blog of Impossible Things where he pushes his limits by pursuing extreme and impossible goals . His most recent challenge was losing 34 pounds in 8 weeks and getting six pack abs.

Despite stimulus efforts from some of the world’s major central banks, a host of disappointing economic data and geopolitical turmoil in the Middle East, financial markets had a quiet week.

This pause gives us an opportunity to move away from macroeconomic issues and focus on narrower investment concepts. This week, we’ll look at an interesting phenomenon that occurs when a single investment has an outsized impact on the market. For example, if a single stock accounts for 10% of the market cap of an index like the Standard and Poor’s 500 Index, price changes in that stock can drive the direction of the Index.

Investment portfolios that do not have a level of exposure to the rapidly rising investment that at least matches the index miss out on the gains. Media attention makes it seem like a game of winners and losers but it’s really a matter of strategy. Think back to the technology bubble of the late 1990s. Legendary investor Warren Buffett was ridiculed for his refusal to invest in technology stocks, but when the tech bubble crashed, Buffett’s approach was vindicated.

When looking at your own investments, maintain your perspective. In the long run, you are likely to be better served by maintaining a portfolio that matches your objectives instead of chasing performance.

Been meaning to switch-up that boring training routine? Try your hand at a new sport? Gasp, clean up your diet? You know there are greener pastures out there, but too often it’s just easier to hang on to what you know. Inertia is a powerful force in human behavior, and it’s what lurks behind the status quo bias. 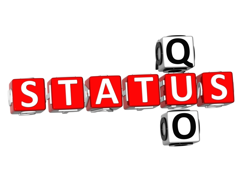 In general, people tend to avoid change because it requires energy and because the results of change can be unpredictable and that’s scary. You’d love to try that new workout routine but maybe you won’t be great at it, or it will erode the progress you’ve already made. Or maybe you just don’t feel like making the effort to set it up.  Better just to sit tight until there’s a dramatic reason to shift, right? No. When it comes to financial planning and investing, this mindset can be especially hazardous. Setting goals and creating financial plans to achieve them is hard work and those efforts often entail difficult decisions.

But you’re not going to reach your goals by avoiding the process. To break through the inertia of the status quo bias, try the following: